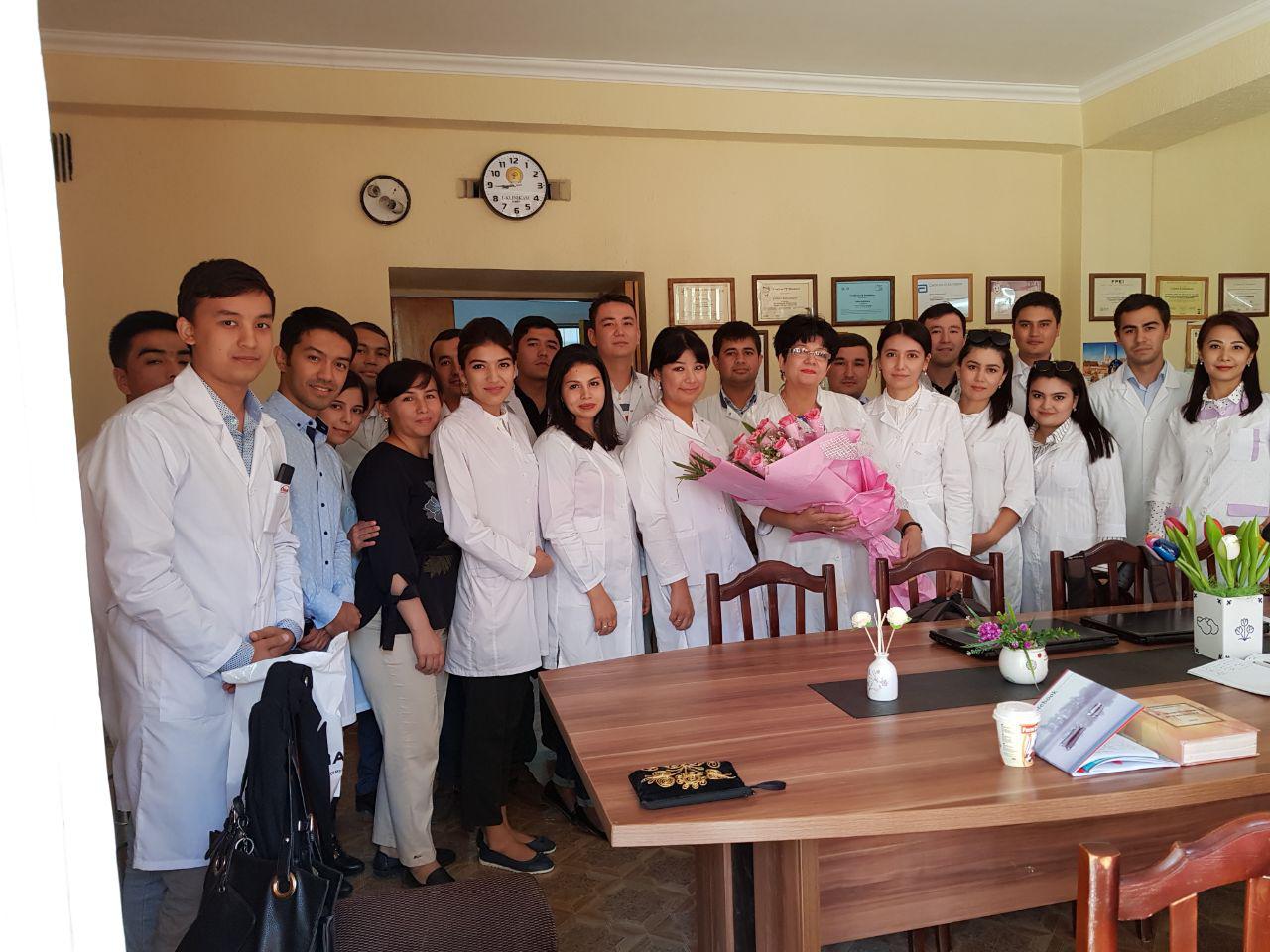 Neurological diseases – are part of medicine that studies the etiology, pathogenesis and clinical picture, as well as methods of diagnosis, treatment and prevention of diseases of the nervous system. Specialized neurological medical care for the population of modern Uzbekistan was developed in the 20s of XXth  century, after the organization of the Department and Clinic of Nervous Diseases at the Medical Faculty of the Turkestan State University. Significant influence on the development of neurology in Uzbekistan had a Russian school of neurology. Headed the department, one of the patriarchs of neurological services in Uzbekistan was Professor Michael Zakharchenko. Prof. Zakharchenko widely known as the author of the textbook “Nervous Diseases” (1930). He was a highly erudite specialist neurologist, scientists, organized his own school of neuropathologists Uzbekistan. His disciples were Professor GM Freydovich, IL Skobsky, MH Fariz, FK Semenov, DC Bogorodinsky and Ya. Gordon organized, and for many years headed, chair of neurology of the Tashkent Institute of Advanced Medicine.

From 1940 to 1959, head of the department of Tashkent Medical Institute was prof. LY Shargorodskii. A talented scientist, educator, clinician, it is a new approach to the teaching of the course of nervous diseases at the Institute. Prof. LY Shargorodskaya deeply examined the pathology of the autonomic nervous system, as well as hereditary neuromuscular diseases. They prepared a whole galaxy of highly qualified neurologists. From 1959 to 1966. Acting Head of the Department of Nervous Diseases Tashkent State Medical Institute performed Assoc. GY Palyants, prof. S.G.Ahundov, associate professor Z. Yeletskaya.

Since 1963, the Department of Nervous Diseases TashMI, and then the first of the Tashkent Medical Institute led Corresponding Member ASRUz, Honored Scientist of the Republic of Uzbekistan prof. Madjidov NM, who has made and continues to make a huge contribution to the development of neuropathology and the organization of teaching and educational process. Prof. Madjidov NM is the author first published in the Uzbek language textbook “Umumiy nevrologiya.”

Professor Madjidov NM is the author of over 500 scientific papers, including 26 monographs, 4 textbooks for medical schools, 48 ​​teaching and popular science brochures. Under his editorship released 38 collections of scientific works and works of congresses and symposia. Prof. Majidova NM prepared a whole galaxy of professors, associate professors, PhDs, practitioners neurologists for Health of Uzbekistan. His students are prominent prof. MM Asadullayev, prof. AI Khodzhaev, prof. HM Halimova, which he gave superintendence for the Department of Nervous Diseases of First TashMI.

In 1990 the Second Tashkent Medical Institute was founded, in which the Department of Nervous Diseases headed by one of the most talented student of prof. NM Majidov – prof. MM Asadullayev. Professor MM Asadullayev being of great scientific and educational and methodical work. So, he is the author of seven books, over 395 scientific publications, scientific and educational recommendations, 28 copyright certificates, patents and innovations. Under his leadership reserved 6 doctoral and 29 master’s researches, and carried out scientific researches for 12 graduate students and doctorants.

Continuing the tradition passed his school, Professor MM Asadullayev with pupils develop pathogenesis, drug treatment and prevention of cardiovascular and inflammatory diseases of the CNS. In recent years, attention they paid to the problem of epidemiology and course of acute cerebrovascular events.Study and scientific validity of the results of epidemiological studies organized them allowed to raise to a new level procedure for organizing emergency medical aid to the population of the proposed them and open office neuroreanimation.

For the first time at the Department of Clinical Neurophysiology a laboratory, which is the basis for in-depth scientific research on inflammatory diseases of the brain and its membranes for epilepsy and seizures.

To date, he and his students studied the problem of Epidemiology of stroke in environmentally disadvantaged areas, neuropsychological syndromes in various brain diseases.Asadullayev – the largest scientist, educator, social activist – full of energy and enthusiasm of people.

In 2007, for health reasons, prof. Asadullayev MM voluntarily left his post as head of the department and temporarily worked in this position Professor, MD Aslanova S.N.

Professor Aslanova S.N. highly qualified neurologist, currently professor of neurology. During her scientific work has been published about 148 scientific papers, 2 manuals, 13 teaching aids, 72 journal articles. 61 theses within the Republic of Uzbekistan, CIS and abroad. She directed 12 master’s thesis and prepared 2 cms Professor S.N. Aslanova disciplined, ambitious, and is currently a professor in the department, and at the moment it is – responsible for training medical residents.

In October 2008, the Academic Council, Professor GS Rakhimbaeva was unanimously elected to the post of head of the department. Rakhimbaeva Gulnora Sattarovna – MD, Professor, Head of neurological diseases of TMA. Currently, she is a member of the editorial board of the journal “Neurology”. Deputy Chairman of the Association of Neurologists of Uzbekistan, vice-president of the Uzbekistan international fight against Epilepsy (ILAE), a member of the European International Academy of Neurology (EAN), a member of society, “the international fight against stroke.”

Professor GS Rakhimbaeva – One of the students, professors Asadullayev MM Since 2001, he headed the Department of Neurology with a course of medical psychology and genetics II Tashkent State Medical Institute.

Under the initiative of prof. Rakhimbaeva GS School was created for active, ambitious researchers and highly skilled neurologists. They and their students create the basic directions that solve modern problems of neurology, ie epilepsy in children and adults, and inflammatory diseases of the brain blood vessels. Under their leadership, were carried out clinical and experimental studies of brain stroke, metabolic encephalopathy, meningoencephalitis, post-traumatic CNS injury in adults and children and created measures for their medical treatment. The results of the above research have been repeatedly described in many international congresses, symposiums, congresses and conferences, including in France, the United States, England, Sweden, Finland, Austria, Belgium, Switzerland, Greece, Turkey, Germany, Italy and others.

Under the guidance of prof. GS Rakhimbaeva were prepared 15 Ph.D. and 2 Ph.D. Currently under her brought to the end of two doctoral dissertations. More than 300 scientific articles have been published in national and foreign level. It was also published one book.It is considered highly qualified, responsible, honest person, as well as an innovator.Prof. GS Rakhimbaeva from 1999 to the present time is considered a member of the Academic Council on specialization “Neurological disorders and psychiatry” in TIMA.At the moment, the department has six professors, including Professor Rakhimbaeva GS, Aslanova SP, Asadullayev MM, Halimova X.F., Ibodullaev 3.R., MD Muratov F.X., 6 associate professors, including MDSaidvaliev F.S, MD Yakubov MM, MD Prokhorov AV, PhDMirzaeva KS, MD Tuychibaeva NM,MD Matmurodov R.J. Ph.D. Ishanhodzhaeva GT, senior teacher, Shamsieva WA and assistants. This suggests that the scientific potential of the department is very high.

Scientists of the Department together with his students continue to follow in the footsteps of their teachers and continue begun their work. In recent years there have been many advances in the field of neurology, and pushed forward in the future with and a lot of interesting and very bright ideas.